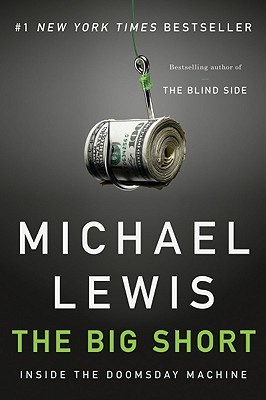 I’ve heard about Michael Lewis a little bit, more so after he released his latest book on algorithmic trading in 2014 called Flash Boys. During and after the book came out, there was lot of commentary online, especially on Hacker News, which I found really fascinating. I didn’t understand 90% of the things being written and debated, but nevertheless it invoked some interest in me. I wanted to start reading few of his books and I was surprised to find this book, The Big Short: Inside the Doomsday Machine, for under a dollar at Goodwill and I thought I’d give it a read. If anyone doesn’t know Mr.Lewis, he also wrote Moneyball which came out as a movie starring Brad Pitt.

The Big Short traces back the source that led to the 2008 global financial crisis which destroyed trillions of dollars of wealth and millions of jobs. Having that as the backdrop the book goes into a nice account of all these smart and persistent people in the finance industry who knew what was happening from as early as 2005 and took advantage of it to make millions, nay, billions of dollars.

The book is really easy to read and almost sounds like financial fiction. It’s not heavy in math or formulas and is perfect for someone who doesn’t come from a finance background. Credit Default Swaps (CDS), Credit Debt Obligations (CDO), short selling, derivatives and other financial terms are explained very clearly. Since the books is mostly about CDS and CDOs, if you understand these concepts right then it’s going to be a much easier read.

After reading this book you are going to get livid about big banks, wall street firms, lenders and more importantly the rating agencies and with good measure. The rating agencies are the worst and are portrayed as such. They are the ones that should have done their due diligence and instead they rated a pile of crappy derivatives as triple A and facilitated the transaction between the sellers and big pensions funds, insurance agencies and institutional investors. It’s amazing to see how clueless most of the investors were, buying these derivatives tied to sub-prime loans. They blindly trusted S&P, Moodys or Fitch ratings of these sub-prime derivatives and didn’t do their homework to see what’s actually inside these packages. What’s missing was the whip against SEC. I thought the book would go more into the incompetency of SEC or FED and their inaction and inability to police the financial industry but I guess that’s a volume onto itself.

More importantly the book focuses on the lives of these small group of people - mostly hedge fund managers and traders working for them - who dug into the Sub-prime mortgage industry and silently accumulated short positions from 2005, a full three years before the explosion of the super volcano. The books explains the methods they employed to study the sub-prime loans, understand CDOs and their default rates and create a market for Sub-prime CDS to exploit the foolishness and greediness of everyone from lower class American citizens to lenders to investment banks & mega wall street firms. I have to be honest here in that before reading this book I didn’t have much sympathy for the homeowners who took way more debt that they can handle and had to go through financial hardships after the crash. But after reading about the lending industry it’s clear that they facilitated such things to happen and in fact outright lied to the people who they were lending to about the economics of home ownership, interest rates and the promise of uninterrupted rise in their home prices.

I bet the situation is even more complex than what’s portrayed in the book about the financial crisis but it’s a good overview of the situation and does a good job of telling the story to a layman like me. In the end it’s pleasurable to read about these small band of people who made out with a lot of money by betting on the incredible stupidity of Wall Street (or was it arrogance?). I rate this book 4 stars and I’m looking forward to read the rest of the books written by Mr.Lewis.