In my teens, I was obsessed with mystery novels. I was not a voracious reader or anything back then but from what little I read I was into Agatha Christie, Nancy Drew, Hardy Boys and few others. I discovered Sherlock Holmes collection and I found them extremely interesting and leaps and bound better than any of the mystery novels I was reading when I was a kid. I read few of Doyle’s works but not all and it left a lasting impression upon me during my years to come. I even named my dog after Doyle’s character, Watson. I’m his Sherlock Holmes.

So upon getting my new Kindle (which I love!) and finding that some of Sir Arthur Conan Doyle’s collection were free download for Kindle users, I planned to read rest of his works. I got The Memoirs of Sherlock Holmes straight out of the Kindle store and decided to give it a try to see if I would still like it. 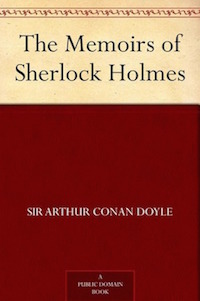 There are 11 short stories in the memoirs and each one is a fairly quick read. Overall I was a little bit disappointed. What I found as highly intelligent and fascinating in my childhood doesn’t hold true anymore, at least for some of the short stories. I only found 2 of the 11 stories, The Naval Treaty & The Final Problem, to be some what enjoyable and intriguing. I think the phenomenally well done Sherlock Holmes TV show might have had a negative effect on me in reading the Classic works. I really love the TV show so the stories in this book, as much as I wanted it to be awesome, didn’t hold up to my expectations.

I never thought Professor James Moriarty, the arch enemy of Holmes, would be first introduced and killed in a single short story! I almost expected it to be a volume onto itself and not to mention Doyle decides to kill Holmes character at the end of this same story as well, “The Final Problem”. But fret not, Holmes gets revived by Doyle in a different novel because of public backlash in early 1900’s for killing the famous fictional character. I rate it 3 stars but I’m not going to give up reading rest of Doyle’s works. I understand these are short stories so they feel rushed and not so thrilling. I’m going to try reading the longer novels and see how I like it.