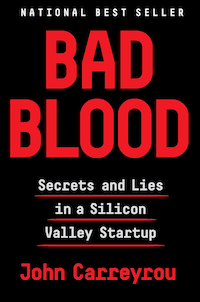 I recently finished a book about Theranos’s rise and fall and it was so interesting that I wanted to write a post about it. I highly recommend this book to anyone, no matter what background in tech or medicine you have.

The book is called Bad Blood - Secrets and Lies in a Silicon Valley Startup and it’s written by Wall Street Journal’s investigative reporter, John Carreyrou. The book is about the blood testing and diagnostics company that came out of Silicon Valley in 2000’s and was estimated to be worth around $9 billion in early 2010’s and promptly went to $0 and shuttered its operations in 2018, the same year the book came out. The bombshell scandalous piece about this company came to broader light in a Wall Street Journal article in 2015 and was written by the same author as the book. It took three full years for the company to go bankrupt. Isn’t that amazing? The company was exposed as a scam and it still survived for three years.

The book itself is a page turner. I couldn’t put it down and completed the book in four days of reading. For the majority of the book, I was angry reading it. I remember looking at the page numbers and when I was at page 200 of the 350 odd pages of the book I was still extremely angry. There are so many characters in the book to guide your anger towards.

…and the countless other yes-men that worked for Theranos, greedy investors and employees, and sociopaths and psychopaths associated with Theranos one way or the other. Lawyers came out as the most evil and worst of this pack.

I have no sympathy for any of them and I wish every one of them get long prison sentences. Alas, I don’t think any of that’s going to happen, but it’s good to see most of them knocked off their pedestal, have their credibility tarnished, and spent (still spending) countless hours in courts tied up in legal issues with SEC, FDA, investors, partners and patients.

The book also talks about the day-to-day operations in the company and how terrible the working conditions were. I have no idea how all these super smart people with PhD degrees from MIT, Stanford etc. suffered through such terrible working conditions and knowing that it was all a huge scam. The stock options and their worth at one point must have blinded everyone. So much talent wasted on this enterprise for so long. These folks could’ve ended up in other fields or companies where they could’ve actually made a difference. In the Reddit AMA that John did, someone asked if anything truly innovative came out of this enterprise during its existence and he said no. I would take that with a grain of salt but can’t help but feel in the back of my mind that that’s probably true.

Walgreens and Safeway involvement with Theranos was another rage inducing episode. How can these massive companies fell for a scam? I spend hours and hours researching when buying a $30 gadget and here’s almost half a billion spent between Safeway and Walgreens to bring Theranos technology into their stores without any critical research and due diligence. So many blind spots.

If a journalist can see through it with a little bit of work, how can the companies, investors, media, regulatory agencies and anyone else in position of power and knowledge could overlook and buy into this scam. It’s very disturbing and very unbelievable. Why did it come to a reporter calling BS on this and putting a stop?

I have deep respects for people like Tyler, Erika, John, Ian and few others that had their moral compass straight no matter what the situations is. One of the silver linings of this whole saga, apart from the company itself going bankrupt, Holmes net worth dropping to $0, members awaiting trials, are these remarkable people that made a bad situation come to an end before lot of lives were put at risk from shoddy blood testing and basing treatments on those results.