It’s been more than 3 years since my last post on this site. I’m not sure how the time went by without any updates but I know that the major factor in not being able to write was when I switched to a new employer in early 2017. This meant a move across the country and being busy with work and life. This post is an attempt to break this pause.

Few days ago, I upgraded my site from Jekyll 3.x to Jekyll 4.0 which was painful the way I did it. With the upgrade, I got rid off Google Ads and Analytics on the site and turned off ads in Disqus. This blog is not popular enough to generate ad revenue and the ads were making the site look like a malware ridden tech blog. I really don’t care for any site analytics either. I’ll rather have no external or third party JS loaded into this site. The site loads and looks a lot better now.

I had a lot of unfinished blog posts in my _drafts folder. I was going through and most of them are not relevant for publishing anymore. The drafts were from 3-4 years ago with very little information in them and I won’t be able to complete and publish them. Couple of the drafts were about Emacs. I was about to delete them as well but figured I’d just post it out here after a little cleanup. Here are my Emacs drafts…

I was using Emacs for everything or at least I was trying to. I used Emacs for editing, terminal operations, note taking (org-mode), password management, Oracle client operations etc. I wanted to be in Emacs when I opened my computer until I closed it. With that need came the obsession to customize and learn Emacs in and out. The customization was such a painful endeavor and I spent a lot of time trying to set up dependencies and adjust setting or copy snippets of elisp code online and tweaking it here and there.

All this was going splendidly until I started experiencing Pinky RSI. I initially had Control key set as my C-, but after experiencing RSI, I switched to using Caps Lock for C-. Using Caps Lock helped a little bit but didn’t completely eliminate my pinky issue. The pinky pain combined with the maintenance nightmare of all my extension and constant tweaking, breaking, learning, painful upgrades etc. left me dissatisfied with the state of my text editor usage.

I wanted something that had less friction. I wanted something where I don’t have to invest too much time to learn or customize and just use the tool to get a job done. I switched to Sublime text for a bit but I didn’t like it that much. I finally ended up with Visual Studio Code and it’s been going very well. I haven’t customized VS code too much nor have I spent countless hours trying to learn the editor. I just use it out of the box, look up some keyboard shortcuts when I need it, and get the work done. I’m very happy with it and don’t have any problems with RSI.

The visual explorer is very easy to get to my files, the regex search on a project level, the integration with Git, spell checker, syntax highlighting, code folding, code snippets/suggestions, editor window splits and movements, terminal integration - everything just works out of the box. It’s just so much easier now. I was wanting to be a 10x in my text/coding/file management and Emacs is certainly the tool for it but I lost patience and I’m happy to be at 3x with VS Code.

I had the following markdown drafted a long time ago about Emacs. I figured I’ll just post it out here in case anyone finds interesting tidbits or workarounds for their Emacs usage.

Here is how I have setup Emacs on Mac OS X. This may not be the ideal workflow for everybody but it works for me pretty good.

This post was last updated on Jan 1, 2017 so all the information below is current as of the date shown.

Here’s my .emacs for the impatient ones and also a screenshot of the editor with the beautiful solarized-dark theme. 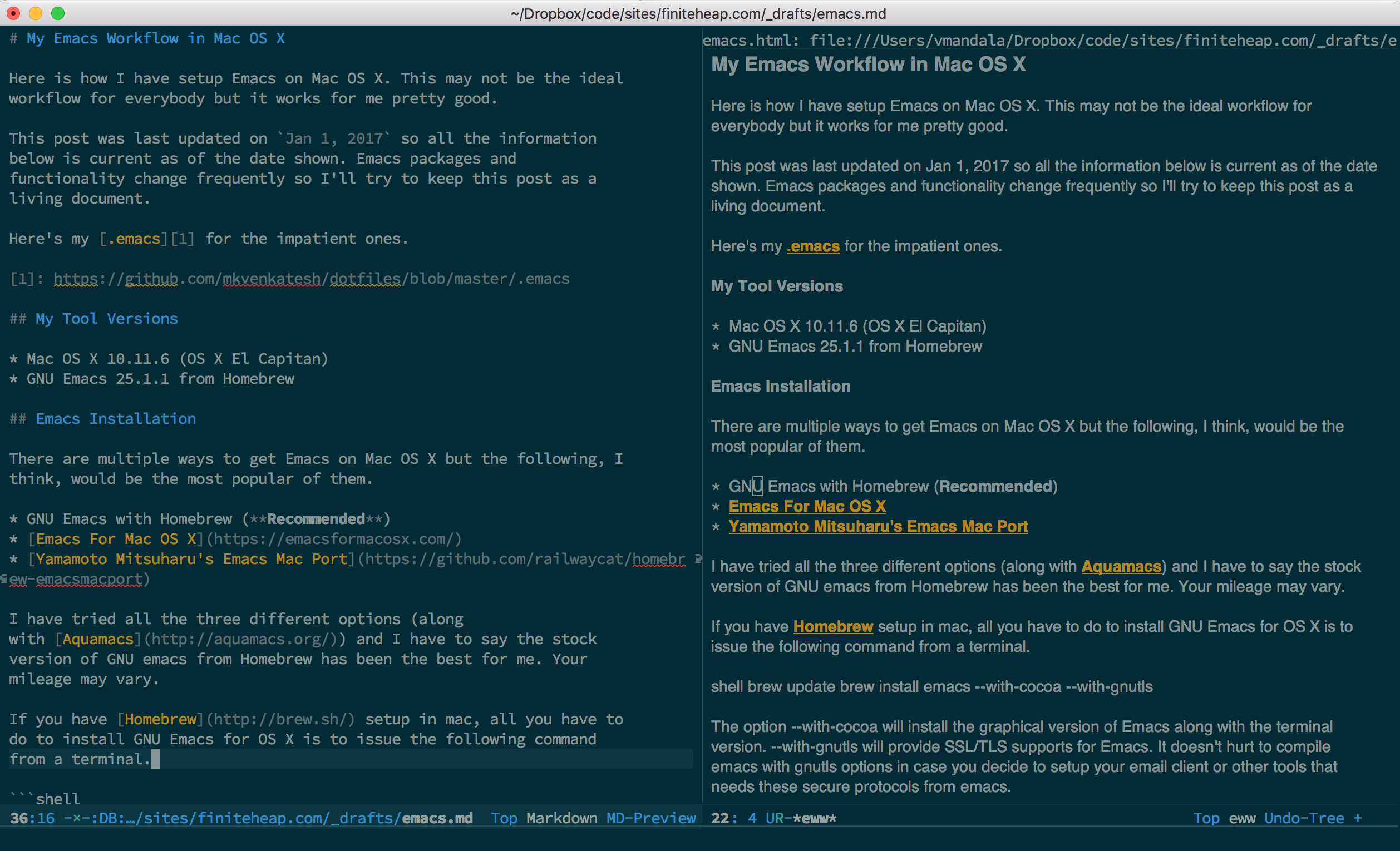 Note: It is paramount that you setup Node, Ruby and Python properly in your computer. There are lot of third party tools that are required by Emacs packages and they are often NodeJS, Ruby or Python packages installed via npm, gem and pip respectively. I have used version/environment managers to manage the installation of these three tools and I highly recommend doing it this way but it’s not a necessity.

There are multiple ways to get Emacs on Mac OS X but the following, I think, would be the most popular of them.

I have tried all the three different options (along with Aquamacs) and I have to say the stock version of GNU emacs from Homebrew has been the best for me. Your mileage may vary.

If you have Homebrew setup in mac, all you have to do to install GNU Emacs for OS X is to issue the following command from a terminal.

The option --with-cocoa will install the graphical version of Emacs along with the terminal version. --with-gnutls will provide SSL/TLS supports for Emacs. It doesn’t hurt to compile emacs with gnutls options in case you decide to setup your email client or other tools that needs these secure protocols from emacs.

If you want to use Emacs effectively, you want to run Emacs as a server and use emacsclient to connect to it to edit files. The advantage with having the emacs server running is that your .emacs file would’ve been already evaluated and all the libraries or variables will be set so when you issue an emacsclient command to edit a file, it will be zippy.

To use emacs server/daemon effectively, don’t do brew services start emacs. If you do, run brew services stop emacs. Basically don’t run emacs in daemon mode. Just include the server-start command in your .emacs file and then open the application on GUI app in login. Now you can use the running GUI instance to visit files, or double click on files in Mac to open files in the same frame (set ns-pop-up-frames). from the terminal you can do emacsclient -n .netrc to open a file in the existing GUI frame. If no frame exists, you can start one with emacsclient -c

Some aliases that I have defined;

alternate-emacs is a bash script containing the following;

If you don’t do this you will get some weird gibberish when bash starts in ansi-term mode. For me, I get the following;

I was getting *ERROR*: Cannot open terminfo database file in ansi-term for certain applications like pass that uses EDITOR variable. I was using emacsclient -t, instead now I use emacsclient

Make sure you set SQLPATH variable in bash profile and also in your emacs using setenv or exec-path-from-shell to specify your sqlplus script (user profile) folder.

I had lot more sections planned out to detail my Emacs configuration and usage patterns but I didn’t get to complete and it’s too late for me to write them out now, given that I’ve been out of Emacsland for the last three years. The keystrokes are still etched in my hand memory though. Every time I open emacs for any reason in the terminal today, I can still effectively navigate and edit files.