The old Finite Heap site was hand built and was hosted with MyDomain under a shared Linux hosting plan. The hosting plan was okay for a static site. It was about $51/year and had SFTP option and I think that was the highlight of it. CPU and memory were shared and disk space/bandwidth was unlimited. For a static site that doesn’t get many visitors this is more than anyone needs. Oh and my old hosting plan had support for PHP and Perl scripting but that would have probably hit the CPU limit for a moderately busy app. I wasn’t planning to use any server side languages anyway so it suited my purpose for couple years.

Then came the talk and hype of DigitalOcean. A full VPS with SSH login and complete control over the box starting with $5/month? That never happened in the hosting world. I didn’t think I would use that much capacity so I never switched to DigitalOcean and I was waiting for them to go out of business for giving such cheap but fantastic options. I was wrong and they flourished. Why not have more options and control over your hosting when the pricing is almost the same between the two companies. Now a 512MB memory with 1 CPU core and 20GB SSD storage is just $5/month so I pulled the plug on MyDomain and finally went with DigitalOcean. 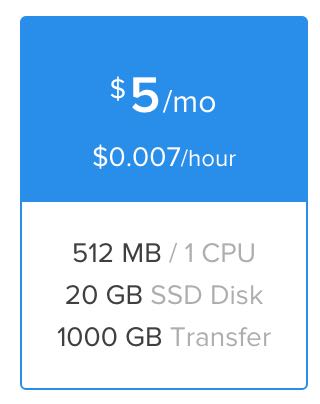 DigitalOcean has some really nice features. They call a VPS instance a droplet. You can create a droplet based on variety of Linux flavors and you can select regions, size and automatic backups. They also provide free snapshots! Backups cost money though. You can add your public SSH key while you create a droplet so you can later SSH into it and manage the box easily. Their knowledge-base articles are the best documentation I’ve see for server maintenance, tools setup and configuration. The articles that they send you through email after you create a droplet is pretty nice and I was able to setup my Ubuntu droplet fairly quickly with some basic security and server configuration (nginx, fail2ban, SSH hardening, UFW rules etc).

While switching to DigitalOcean I decided to use Jekyll instead of hand crafting the site code. It’s so much easier to focus on the content instead of site maintenance. It’s faster to write blog posts in markdown and just issue one command to build up the static site with tons of features. Jekyll provides an easy way to manage layouts, includes, variables, pagination, drafts, tagging, categories and various other features. I’m really happy and productive with this setup i.e DigitalOcean + nginx + Jekyll. I hope I stay on this for a while before I get distracted by something shiny and start all over again.