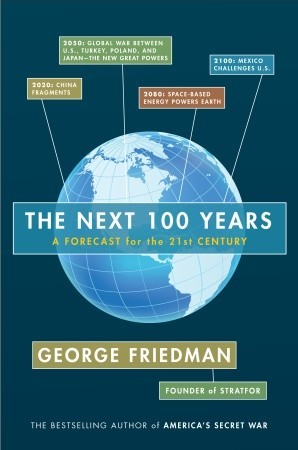 I first heard about this book in an online investment forum while checking out the forum members discussion on The Big Short book which I had just finished back then. I looked up this book and found that it was written by the same guy, George Friedman, who founded STRATFOR, the geopolitical think tank. My old boss used to subscribe to STRATFOR newsletters and swears they are one of the best newsletters out there when it comes to understanding world events and geopolitics. So naturally my interest was piqued and I picked up this book to give it a read.

The author claims in this book that he’s uniquely positioned to see the outline of major events that is going to happen in the 21st century. He argues he has a good understanding of the history of geopolitics and the current events, so with some accuracy he can predict how events are going to unfold in the world stage. He supports this by saying lot of people in power knew that World Wars I and II were imminent as early as 1890’s and that Germany would be the aggressor in both cases and that turned out to be true. People predicted, long before WW II ended, the cold war and eventual fall of the Soviet Union, leaving United States as the single most powerful country in the world, and that turned out to be 100% accurate. Now the details might be off in all these predictions, he argues, but the big picture remains more or less the same and that’s what he provides in this book. He does go into specific time lines and details but that’s more of a fun account of what could happen.

I was fascinated by the historical events that happened since the 15th century. It’s not comprehensive but gives a good outline of how Western Europe came into power, the events surrounding the two World Wars, the decline of European empire, the rise and fall of Soviet Union and the rise of United States. I’ve come to appreciate world history after reading this book. Did you know that California, Nevada, Southern Utah, Southern Colorado, Arizona, New Mexico and Texas was part of Mexico until mid 19th Century? That’s like half of the current United States! After the Texas rebellion and US-Mexican war in 1850’s, US defeated Mexico and annexed all the aforementioned states. This could be common knowledge for Americans but this was eye opening for me.

After going through the history, the author writes about geopolitical predictions for the 21st century. He basically makes a strong case why United States is going to be the most powerful country in the world for the next 100 years. He attributes this primarily due to the complete control of the oceans and seas by US Navy, the geographical location of the United States in North America having access to both Atlantic and Pacific oceans, the eventual commercial and military space domination and also the inevitable easing up of immigration policies to address labor shortages due to population decline.

I read all the predictions as more of a science fiction account than as a recipe of what will follow in the future. I just find it really hard to believe anyone knows anything when it comes to what’s going to happen in the world in the next 5 years much less 100 years. For instance, the author dismisses China playing an important role in the 21st century for various reasons. He lays out his road map for rise of Turkey as a major regional power which will form an alliance with Japan to become a global power that will rival United States and wage war on global scale (World War III?). Mexico is given a lot of importance in this book as well, where the author says could rival US eventually at the turn of the 22nd century. He predicts robots will not displace workers on a mass scale until 2080 and immigration will be key for every advanced country to further its economy, which I find hard to believe. If anything the rise of robots could be way sooner. One of the major problems that he talks about in several chapters in the book is the declining global population. That is going to put a serious wrench into the growth model that every modern economy is based on. That does sound really disturbing. It will be fun to look back at this book around the year 2050 and reconcile what’s happened and what was laid out in this here.

There are also really cool accounts of what type of weapons could be deployed by the military forces around the world, what kind of energy production and storage is possible and how space commercialization and colonization begins to take place. I really enjoyed reading this book. The words were easy and I seldom opened up the dictionary which resulted in an uninterrupted and faster read. It’s a fun read and I rate it 4 stars. There’s another book that this author wrote called the The Next 10 Years which I think might be interesting as well and that would be my next read sometime this year.